The McAllister Museum of Aviation is the leading preservationist and educator of aviation history in Central Washington.

McAllister Museum of Aviation was formed in 1999 after the passing of Charles McAllister, Yakima aviation pioneer and the owner of McAllister Flying Service.  The museum is staffed by volunteers and supported through fuel sales, donations, and rental of the museum for special events.

The museum is housed in the original hangar of the McAllister Flying Service which provided all aviation services to aviators until the building of the Yakima airport???  The museum includes 30+ displays featuring Yakima Aviation history, Yakima Aviators and their military service.

The Museum is a 501(C)3, and appreciates support from visitors and the community.

The new hangar was completed n 2017 and was funded, in part, through the efforts of Senator Jim Honeyford, resulting in a grant from the State of Washington, as well as private donations, the McAllister Museum of Aviation, and the support of the Civil Air Patrol.

This additional space greatly expands our ability to display items for museum visitors including the exhibition of the two planes owned by the Museum, a display of large engines, as well as an storage area for archives. The Civil Air Patrol parks its planes inside a leased portion of the hangar, and has offices and meeting spaces for training.  On the second level is a large viewing area where visitors can watch planes land and take off from the Yakima Air Terminal.

If we can work out a loan agreement, the new hangar will house the Yakima Clipper glider, a wooden aircraft built by Charles McAllister in 1931-2, if it can be moved from its current display at the Museum of Flight in Seattle.

Outside groups can Rent the Hangar for special events.

The Start of Charles and Alister McAlister, the “Wright Brothers of Yakima Aviation”

Charlie and Alister McAllister acquired and rebuilt their first airplane, a Standard J1, in 1925. In 1926 they took flying lessons from the famous instructor and aerobatic pilot Tex Rankin. Then they flew their Standard J1 to Yakima to start their first flight school. At that time, there was no airport, simply a field known as Goodman’s Pasture. Later on, the pasture was converted to the Yakima Airport, McAllister Field.

Moving to Yakima in 1926, the McAllister brothers put their aviation training to work and set up the second aviation business in Washington State in Yakima.

They built the Yakima clipper and took it on its first flight in 1933.  Over 72 years in business, Charlie trained 5,000-7,000 pilots pilots and fueled thousands of aircraft – private, commercial and military – especially when as aviation ramped up to prepare for the war. 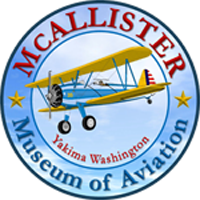